Skip to content
Great GrandMasti – Where cinema world is hanging and zooming? It matters a lot for society from global to local and vice versa because what we watch and listen to becomes our way of lifestyle and understanding and perception grows and dies accordingly. 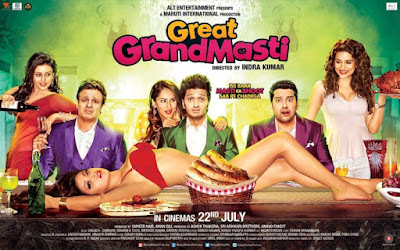 The upcoming generation is accelerating its trends and choices via surrounding acts and events, so it’s very tough to make them stick to the corner and keep them away from all such stuff because of this vast diversity and cultural variations that exist in society. Even viewers became very choosy and selective about their wows and shows means what to see and not to see but the thing is that cinema is the biggest trend maker in the whole world as everyone wants entertainment in their lives.

There are lots of varieties of movies release every Friday and viewers zoom in there for infotainment and more hang out for the weekend celebration away from job works. One of them there is a movie soon to release called “Great Grand Masti” quite very funny and outstanding performance of the crew team with double meaning standards of the script. Of course, people also want to get double enjoy in the single ticket at the box office. After looking at its trailer I felt so doubled without spending any single penny and hopefully you too. Its first part was very successful making people understand the essence of double meaning and adult comedy too. Let’s wait for the complete double infotainment at the silver screen till its release at the box office.

Trailer Analysis – Aftab Shivdasani, Ritesh Deshmukh, and Vivek Oberoi with four dashing hot girls called Urvashi Rautela, shraddha das, Mishti, and pooja Chopra made the movie closer to hot and romantic with what the movie screen player and story writer wanted to show the viewers. The direction of Indra Kumar made the movie profitable to Ekta Kapoor as she wanted from crew members of the film. One more interesting in this movie is Urvashi Rautela as in “Chudail “Fury” lighted movie with four hot moons.

You Tube Analysis- I am the 4,201,461st viewer of this trailer and felt very hot while watching closely this trailer. See this trailer has 12683 likes and 2000 dislikes too it means viewers also have a double standard perception for this movie. We can not say it’s hit and fit now and can not zoom at any conclusion, it all depends on its likes and dislikes on the silver screen.